Jim "The Rookie" Morris' inspirational and motivational message about following through on your dreams and promises to others connects with all audiences, young and old, male and female. His life story is also the inspiration behind the blockbuster film, "The Rookie," starring Dennis Quaid. This family film won the ESPY for best sports film of

Imagine growing up as a nomadic, lonely kid with your parents fighting and struggling to make ends meet. In the midst of all this misery, you have a dream to escape and make something of your life, perhaps becoming a baseball player. A major league baseball player.

This was the dream of Jim Morris.

But like so many of us, Jim’s dreams were derailed by a lack of preparedness for the rigors of life. He didn’t appreciate it when good things happened, because things had always been bad when he was a kid. He was angry and bitter because of his upbringing, mainly the relationship he had with his dad, who was alternately remote and cruel. Jim’s mom, however well-intentioned, was having too many problems with her marriage to Jim’s father to really be the type of mom that she’s become today. Instead, Jim’s saving grace as a kid was two-fold : his love for baseball and his grandpa Earnest, who ran a clothing store in Brownwood, TX. People would come from miles around to buy suits from Earnest, including people like Gene Autry. Earnest taught Jim some of the most important life lessons ever. He taught Jim one simple thing: “remember who you are.” To Jim, that meant never do anything in public that would embarrass yourself. Jim would make friends by playing baseball.

It took Jim a long time to learn that lesson and make it part of his life. He had athletic talent growing up, but he was too immature to implement Earnest’s lessons. When Earnest passed away from Lou Gehrigs disease when Jim was in junior college, it left a divesting hole in his life. Jim couldn’t get away from home soon enough and signed a pro baseball contract with the Milwaukee Brewers. After a series of injuries, he retired from minor league baseball at the age of 24, got married, got his college degree at the age of 29, and raised a family. Along the way, he also played football and was an all-American punter, leading the nation’s small colleges in punting one year. He probably worked every low-paying job there was trying to make ends meet, from convenience stores to working in a college dormitory. Eventually, he later became a high school science teacher and a baseball coach in the small Texas town of Big Lake. Basically, Jim and his family had had a tough go of it and were having trouble surviving financially. The bill collectors were always at the door and the stresses on their marriage were evident.

At the age of 35, Jim was lecturing his demoralized high school baseball team about pursuing their dreams and about becoming winners. Quite frankly, Jim felt like he’d done everything backwards in his life to that point, but in trying to motivate his team and give back something to others, he got something back from his students: they challenged him to pursue his dreams about baseball. They saw how hard he threw the baseball and really thought he had a chance, but he had no idea how hard he threw the baseball.

A bet was born: if his high school team won the District Championship, something they had never done, then he would try out for a major league baseball team. Miraculously, the small town team came from behind and beat the best team in the area to win the District Championship. Jim then went to an open tryout, where he changed diapers and then went out and threw 12 consecutive pitches at 98 mph to the amazement of scouts in attendance. People at the age of 35 aren’t supposed to throw 98 mph. After some heated discussion with his family, Jim signed a pro contract to play baseball at the age of 35.

Over the next three months, Jim got his body in shape and started playing baseball with kids 10 to 18 years younger. He was known as “the old guy” or “old man river.” His teammates were amazed by this guy who basically showed up at a tryout and threw harder than any of them. Jim was suddenly in Double-A, higher and closer to the big leagues than he was when he quit 11 years before. His arm was holding up too. Then he got called up to Triple A and agents and Hollywood came calling. On September 17, 1999, Jim Morris, age 35, was called to up the big leagues by the Tampa Bay Devil Rays.

In front of family and friends, including his high school players, Jim was called up to the big leagues back in Texas. After visiting with his family down in the bullpen before the game, Jim was called into the game to face all-star Royce Clayton. As Jim ran out onto the big league field at Arlington, every memory he had experienced getting to this place flashed in his mind. The manager, Larry Rothschild, came out to talk to Jim, and the camera was on them and being projected up on the big jumbotron and he was smiling and laughing. Later that evening his wife asked him “What did Larry say to you? You were laughing.” Jim replied “I have no idea what that man said to me!”

im then proceeded to strike out Royce Clayton with a 98 mph fastball in his first big league appearance. That night, as Jim sat in his hotel room with his wife and kids eating pizza, the whole country was talking about this 35 year old high school science teacher who made a bet with his high school kids that led to a try out and eventually to the big leagues 3 months later.

Five days later, Jim Morris’ life story rights had been purchased by Disney and “the Rookie” went into Production shortly thereafter, starring Dennis Quaid. Jim Morris not only served as a consultant to the film, but he also co-authored a book entitled “the Oldest Rookie,” which was published in 2001 by Little Brown and Company.

Jim retired again from baseball in winter 2001 and his life story was filmed in the spring of 2001 near Austin, Texas. Jim’s teammate in pro baseball back in the 80’s, Mark Ciardi, was one of the producers, and when “The Rookie” premiered in New York City in March, 2002 after a whirlwind publicity tour, the film opened to critical acclaim. Eventually, “The Rookie” would earn in excess of 150 million dollars worldwide. “The Rookie” has also been rated one of the greatest baseball movies ever and it won the first annual ESPY for Best Sports Film of the Year.

Today, Jim lives with his family near Dallas and travels the country as America’s foremost inspirational and motivational speaker. His story has become an inspiration to anyone interested in living their dreams. Incredibly, Jim receives fan mail from places as far away as India. He has spoken hundreds of times throughout the country and in Mexico and Canada too. He also gives baseball lessons to kids. Bring Jim Morris to your town. 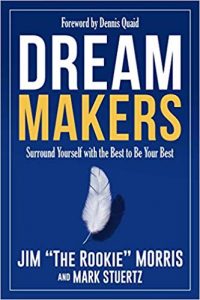