Hugh G. Aynesworth started in 1948 as a sports reporter in West Virginia and later worked in Arkansas, Kansas, and Colorado prior to joining the staff of the Dallas Morning News in 1960. Aynesworth covered the assassination of President John F. Kennedy & was the only reporter to witness the event. Aynesworth has worked for Newsweek Magazine and the Washington

Hugh G. Aynesworth was born in Clarksburg, West Virginia, on 2nd August, 1931. After attending Salem College, he started in 1948 as a sports reporter in West Virginia and later worked in Arkansas, Kansas, and Colorado prior to joining the staff of the Dallas Morning News in 1960.

Aynesworth covered the assassination of President John F. Kennedy and was the only reporter to witness it. Over the next few years he investigated the links between Lee Harvey Oswaldand the Federal Bureau of Investigation and reported on the trial of Jack Ruby. Aynesworth was also one of the first people to interview Marina Oswald.

When Joachim Joesten published his book, Oswald, Assassin or Fall Guy? in 1964, Aynesworth reviewed it for the Dallas Morning News: “If you would listen to this one, he would have you thinking that Lee Harvey Oswald was a polite little misunderstood youth who just got mixed up in the wrong company…Oh how terrible, says Joesten (an ex-German who became a U.S. citizen in 1948 and must wonder why), poor little Lee Harvey was the victim of a ruthless plot headed by Dallas police leaders, District Attorney Henry Wade and his staff and a few “bad guys” from the FBI. Joesten further states that Oswald was an agent of both the FBI and the CIA (how’s that for a 24-year-old who couldn’t spell “wrist”?). It’s the same old tripe with some new flavoring.”

Aynesworth was a strong supporter of the “lone assassin theory” and led the attacks on Mark Lane and his book on the Warren Commission, the pioneering Rush to Judgement (1965). In May, 1967 Aynesworth published a critical article of Jim Garrison in Newsweek: “Garrison’s tactics have been even more questionable than his case. I have evidence that one of the strapping D.A.’s investigators offered an unwilling “witness” $3,000 and a job with an airline – if only he would “fill in the facts” of the alleged meeting to plot the death of the President. I also know that when the D.A.’s office learned that this entire bribery attempt had been tape-recorded, two of Garrison’s men returned to the “witness” and, he says, threatened him with physical harm.”

Jim Garrison responded to this article in his book, On The Trail of the Assassins (1988). He argued that: “As for the $3,000 bribe, by the time I came across Aynesworth’s revelation, the witness our office had supposedly offered it to, Alvin Babeouf, had admitted to us that it never happened. Aynesworth, of course, never explained what he did with the “evidence” allegedly in his possession. And the so-called bribery tape recording had not, in fact, ever existed.”

James DiEugenio has argued: “With the work of the Assassination Records Review Board, many more pages of documents have been released showing how tightly bound Aynesworth was with the intelligence community. It has been demonstrated that Aynesworth was – at the minimum – working with the Dallas Police, Shaw’s defense team, and the FBI. He was also an informant to the White House, and had once applied for work with the CIA. As I have noted elsewhere, in the annals of this case, I can think of no reporter who had such extensive contacts with those trying to cover up the facts in the JFK case. And only two come close: Edward Epstein and Gerald Posner.”As well as the Dallas Morning News Aynesworth has worked for Newsweek and the Washington Times. Books by Hugh Aynesworth include The Only Living Witness(1983), Wanted for Murder (1990), Murderers Among Us: Unsolved Homicides, Mysterious Deaths and Killers at Large (1994), The Vengeful Heart (2000), Ted Bundy: Conversations with a Killer (2000) and JFK: Breaking the News (2003).

Aynesworth was also an adjunct professor at SMU in the 1980s,  teaching on journalism, reporting and ethics. He has also lectured on scores of college campuses and to civic groups. He spoke on the JFK assassination, Cuba, Chappaquidick tragedy, Rev. Martin Luther King assassination, Huey Long assassination, serial murderers, the U.S. Space program and the Henry Lucas hoax on law enforcement. Clearly his knowledge is invaluable.

He is the only two-time recipient of the J.B. Marryat Award, the Press Club’s most distinguished journalist award (1975 and 2009). He has been nominated six times for the Pulitzer Prize and was a finalist four times. He has received more than 70 local, state and national awards, including Headliners, Dallas Press Club Katies and regional and national AP and UPI awards.

Aynesworth has interviewed several U.S. presidents, covered national and regional politics for Newsweek for several years, and covered dozens of national political conventions, congressional hearings and probes. On several occasions he has served as an adviser/contributor for NBC News, ABC News, CBS News and television networks in Japan, France, Germany and Britain.

Currently Aynesworth is retired from day-to-day journalism. However, he is a contributor to the Dallas Morning News (features) and does freelance assignments for Washington Times and New York Post. He is also working on an autobiography and is an adviser to HBO on the upcoming 8-part JFK assassination project for 50th anniversary.

Lessons From History and Q/A 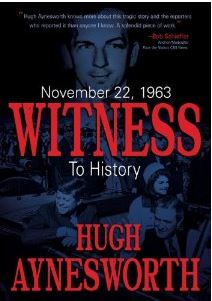